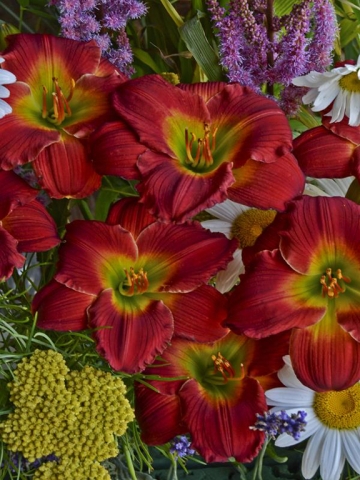 Brilliant cherry red, ruffled blossoms have a brightly contrasting yellow halo and an apple green throat. They rest just above the dark green foliage, held up there like a bouquet all summer long.

It is a vigorous grower that readily increases its foliage and like EARLYBIRD CARDINAL™, it produces several flower scapes per fan. This daylily begins blooming in early midseason and repeats bloom all the way into fall.  In zone 7, there are typically about 105 day of bloom. And since it's an extended bloomer, each flower remains open for at least 16 hours.

Daylilies can survive many harsh conditions that other plants cannot including: polluted city environments, slopes, poor and dry soils, near pavement that is salted in winter, and under Black Walnut trees (not affected by juglone).

Characteristics (Compared to Other Daylilies)